Some types of pests can be a problem inside and outside of your home. A good example is the stinkbug, it has the capacity to be a nuisance in both your garden and your home.

How can stink bugs be a threat to my home and garden?

Stink bugs are members of the taxonomic order Hemiptera, or what is known as the “true bugs.” The term “stink bug” specifically refers to the brown marmorated stink bug, which is an invasive species from Asia. It is active across the Eastern United States and is famous for the unpleasant odor it releases when disturbed.  These pests grow to around 3/4 inch in length, and are primarily brown in color with mottled gray and tan patches. Like most true bugs, they have six legs and two antennae.

Homeowners will typically first spot stink bugs during the early summer. This is the mating and feeding season for stink bugs, and it is during this time that females of the species will begin laying eggs.

Typically, a single female will lay around 25 eggs in a group, and these eggs are placed on the undersides of leaves and stems. These eggs will hatch in less than a week, resulting in a new generation of stink bug nymphs. The nymphs are much brighter in coloration than the adults and have reddish-orange bodies that are marked by black stripes.

Stink bug nymphs feed voraciously in their early stages of life on stems, leaves, and fruits of various kinds. These can include common crops such as peaches, apples, soybeans, and tomatoes. This can result in damage to such crops and is often a major nuisance for farmers and hobbyist gardeners alike. Stink bugs pierce through the stems and fruits of plants when they feed, which can adversely affect the health of the plant and leave behind scarring. Over time, this may result in the death of the plant or ruin any growing fruit. 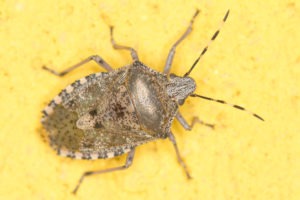 How do I stop stink bugs from invading?

Unfortunately, the problems posed by stink bugs do not end with the return of cold weather. Unlike seasonal pests such as mosquitoes, stink bugs are active year round. They are able to do this because they take shelter during the fall and winter to survive the cold. Therefore, one potential source of shelter for the stink bug is none other than your home.

Stink bugs often exploit small cracks or gaps in the exterior of the structure in order to gain access to the home. Their small size allows them to enter through openings created by pipes, wires, and other utilities as well as any unscreened vents or gutters.

These pests will often hide and remain inactive inside the home, either inside the walls or in the basement/crawlspace. While the entrance of a couple is often unobtrusive, their tendency to enter homes in large numbers can result in an outpouring of stink bug activity in other parts of the home as the stink bugs move further inside. This problem is further complicated when spring returns and the pests once again become active. They will often be seen during this time massed on the exterior walls of the home, sometimes in groups numbering in the thousands. If left unchecked, the stink bug population around your home can grow year by year, becoming an increasing nuisance.

To keep your home stink bug free, your best option is to seal any exterior access points that the pests may exploit. Due to their small size, stink bugs can get through even the smallest openings, so it is important to be thorough in this process. Further, an exterior treatment can be applied during the late summer which can stop the stink bugs before they congregate indoors.

At Arrow Pest Service, our team of technicians is trained to deal with any pest problem you might encounter.

We will perform an inspection and identify any pest problems or conditions conducive to infestation around the home. If we find any pests in the home, we will provide you with the most efficient, safe, and effective solutions in the industry!

Here’s to YOU living pest free!