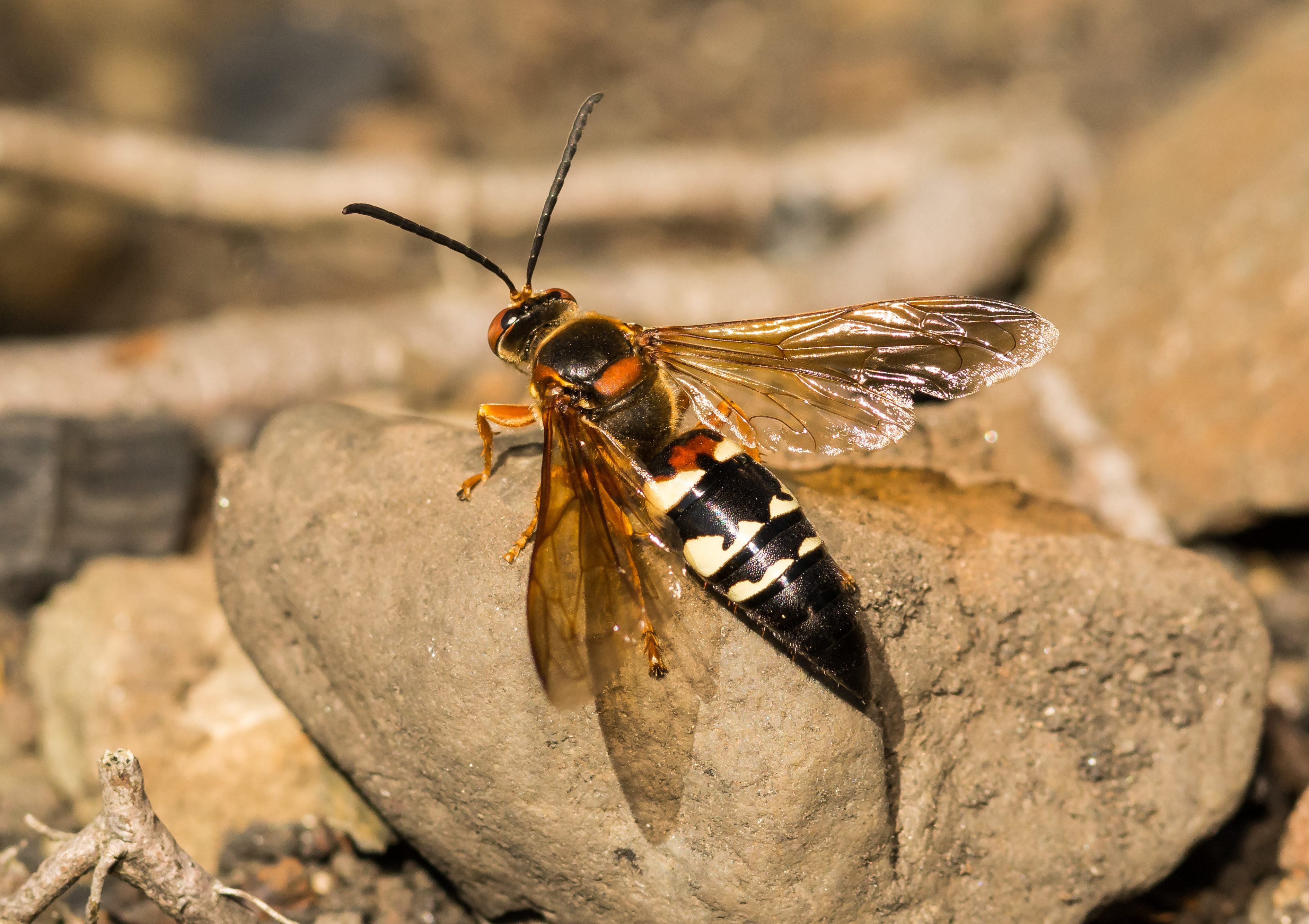 Cicada killers can cause concern for homeowners due to their rather frightening appearance. These large wasps grow to over an inch and a half in length and share similar physical characteristics and behaviors with other more dangerous wasps. While cicada killers can sting, they are not nearly as aggressive as other wasps, and can even be a beneficial ally in the fight against other nuisance pests.

Why is the cicada killer not a pest threat?

Cicada killers are a solitary wasp species best known for (you guessed it) hunting cicadas. They are similar in physical appearance to hornets, yellow jackets, and bees. They have a yellow-black striped abdomen and a rusty-brown colored head and thorax, which is a very similar color pattern to the European hornet. However, unlike European hornets (which are known for their aggressive behavior) cicada killers are much more passive, reclusive creatures.

That said, their venom is extremely potent when used against their real target: cicadas. Female cicada killers mate during the early summer, after which they will build subterranean nesting sites with chambers divided for their eggs. However, instead of just laying the eggs in the ground, female cicada killers will hunt for a cicada to be used as a living host for the cicada killer’s egg. The captured cicadas will be paralyzed with venom, placed into the burrow, and become a source of nutrients for the cicada killer larvae once it has hatched. While this process is rather gruesome, it serves an important function of controlling the population of cicadas (a destructive pest) around your home.

Cicada killers are not a social species, and for this reason, they will not establish large collective nesting sites. That said, they are often found in mass in particular areas because they have very specific environmental preferences. This tends to lead them to nest in well lit, light-textured soils with a low moisture level and close to trees that house cicada populations.

Cicada killers are typically not destructive towards your home or property in any way. That said, their nesting can sometimes disturb the soil, and in large enough numbers they may cause small amounts of damage to your lawn. This is rare, however, typically their benefit in cicada control outweighs any potential risk of soil damage.

How can homeowners tell them apart from other wasps?

If you are seeing wasps that you believe to be cicada killers, it can often be difficult to identify them from a distance. That said, it is inadvisable to go too close to investigate, as there is always a possibility that they are a different, more aggressive wasp species. For this reason, homeowners should consider calling in a licensed pest control company to inspect their property to ensure that any wasps you spot are harmless cicada killers and not a different, more dangerous species.

If you are a Panama City homeowner, we here at Arrow Pest Service would like to be your one call solution for any pest problems!

We have been an industry leader in pest control and lawn care services for year, and we have the expertise needed to safely and comprehensively tackle any current or future pest threats to your home!