Here in the Southeastern United States, palmetto bugs are a common pest problem that has earned the ire of homeowners, hotels, and businesses. These troublesome pests have many similarities to cockroaches in appearance and behavior, which leads many to question:

What exactly is the difference between cockroaches and palmetto bugs?

The answer may surprise you… 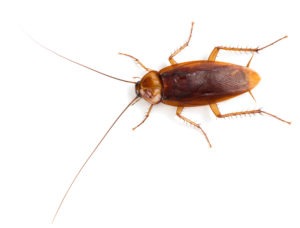 The truth is, the name “palmetto bug” is just a term used to identify a few different species of cockroaches native to the southeast. These include the American cockroach, the smokeybrown cockroach, and the Florida woods cockroach.

Since all of these species can technically be called palmetto bugs, it can be difficult to differentiate them from one another. All of them are brown in coloration, and they all grow to around 1.5-inches in length as adults (though the American cockroach is slightly larger than the other two). Palmetto bugs undergo a series of molts as they grow, each time becoming slightly larger in size.

They have long, flat bodies that are divided into three sections, and they noticeable antennae projecting from their heads.

Beyond this, they also share many similarities in behavior. All species referred to as palmetto bugs behave similarly to other cockroach species. They are extremely tenacious pests and are known to be reclusive. They have a strong aversion to daylight, and as such, they are primarily nocturnal.

They can be extremely difficult to keep out of your home. Palmetto bugs are attracted to moist, warm environments, which makes them right at home here in Florida. They often seek out similar environments inside homes, which can lead them to infest a wide variety of areas that match this description, including:

While these are some of the more common infestation areas, palmetto bugs are easily able to survive in almost any part of the home. Like most cockroach species, they are extremely skilled scavengers, able to survive off of almost anything. They are opportunistic feeders and will consume a variety animal and plant matter, as well as normally inedible goods such as glue, hair, and bookbindings.

Though palmetto bugs are typically associated with filth, the truth is that they can infest even the newest, cleanest homes.

There are a variety of reasons that may lead them to infest your home, but typically it is due to some type of environmental disturbance such as a significant temperature change or significant rainfall. It can be very difficult to fully seal a home so as to protect it from palmetto bugs due to their small size and ability to flatten out their bodies to fit into tight spaces.

Once they are inside, they can be a major nuisance and sometimes even a health risk for people and pets. Cockroaches can carry a variety of bacteria and allergens that they spread in areas in which they reside. Further, they can often contaminate stored food while scavenging, and their rapid reproduction can spread them throughout your home quickly.

If palmetto bugs have spread throughout your home, it is often necessary to call in a licensed pest control company to inspect and treat your home. Palmetto bugs can be tough to tackle without professional expertise, and you can save yourself a lot of frustration and time by calling in the pros as soon as problems arise.

At Arrow Pest Service, we have decades of experience dealing with pest problems for homeowners across the greater Panama City, Florida area!

We employ industry-leading treatment methodologies to ensure that we deal with your pest problems quickly, safely, and comprehensively!